Since 1992, Guy has been the driving force of the “Empty Bowl” charity event.

This event has been growing every year since I  started it in Flint in 1992, after meeting with John Hartom, another Michigan potter, who started the Empty Bowl fund-raising idea in 1991 at Lahser High School, Bloomfield Hills.

My students and I now make approximately 1600 bowls every year, which are then sold at the Food Bank of Eastern Michigan. The Flint Institute of Art,  has partnered with the Food Bank so I can coordinate the making, firing, glazing, packing, and transportation of the bowls. This has now become the Food Banks Signature Event; their LARGEST SINGLE DAY FUNDRAISER OF THE YEAR! In 2013 the total money raised was approximately $37,000.00, enough to supply over 220,000 meals in a 22 county area in Michigan.

The event has moved on from just bowls for sale. There are now over 35 well known restaurants that   donate all types of soup. Panera donates the bread. The tables, tablecloths, cut flowers, and even several venues of LIVE MUSIC are donated for the days event. I make plates to be signed by a variety of celebrities, from Hollywood actors, to Musicians performing in the area, to well known Sports figures and even entire teams. These are then silent auctioned during the day of the sale. The Food Bank also gets corporate sponsors, at various funding levels, to reserve tables for their employees.

The staff of the Food Bank also gives tours of the facility, throughout the day of the event. This creates a needed awareness of the scale of the operation and the need in our community.

EMPTY BOWLS IS THE LAST THURSDAY IN SEPTEMBER 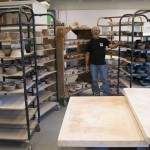 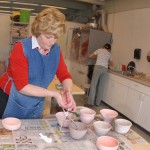 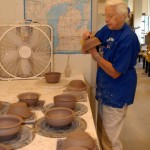 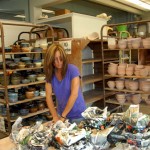 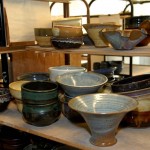 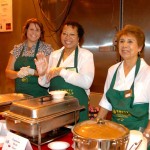 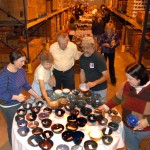 Learn more about this international fundraiser put on by potters: www.emptybowls.net

The Flint Farmers’ Market has been named the  “Most Loved Farmers’ Market in America”.  This in a web contest sponsored by Care2.com and LocalHarvest.org.  Read the full article 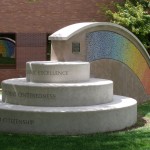 To involve the immediate community gives them a sense of ownership and pride in their local artwork, often inspiring confidence in individuals to try pieces or take classes on their own. See more on Community Artwork>