From the Daughters of the American Revolution

November 9, 2017
About a year ago the Genesee Chapter of the Daughters of the American Revolution asked me to come speak at their meeting in Davison Michigan. I was to inform them about the Empty Bowl Fundraiser that I organize for the Food Bank of Eastern Michigan. 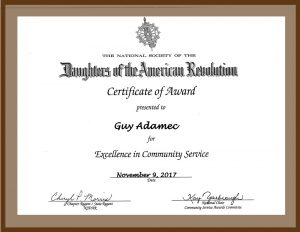 On November 9th of this year I came to speak, and after my brief talk, Carol Powers, the Vice Regent,  proceeded to read the following biography about me, which they researched and sent to the headquarters in Washington D.C. to have approved. I was then awarded  this Excellence in Community Service Award. I am honored and humbled to be acknowledged by such a prestigious and respected group.
~ Guy Adamec

Read what they said at the presentation(pdf)

Here’s a link to our local Grand Blanc News article