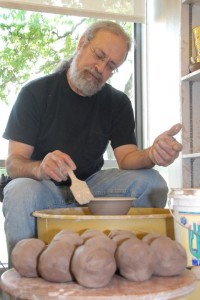 “I make objects in order to interpret contemporary attitudes within the context of traditional forms and aesthetics. This includes working in several media and on a variety of projects; whether I am building a house, working in wood, or making pottery. I want to convey a sense of natural beauty, harmony and balance, while retaining some mystery within the intricacies of the piece; so one does not easily tire of viewing it. I mainly work in clay because it allows me infinite control over form and surface while letting the piece have the spontaneity of a found object, as a rock, coral, or even desert landscape would. Art for me is a balance between man made and natural.”